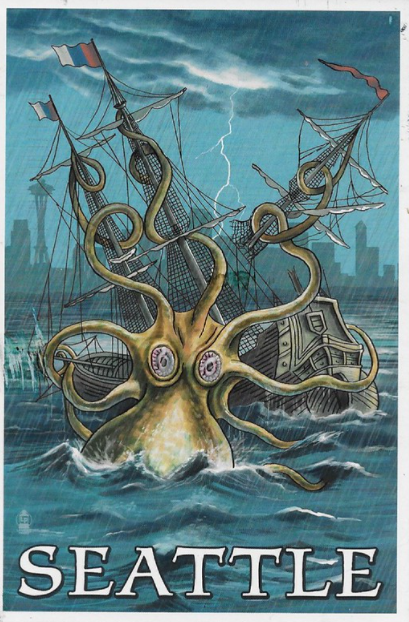 So you've been in a nasty car accident in Seattle. You're possibly injured, confused, and understandably overwhelmed by this massive, high-stakes problem. You may be struggling to make sense of your sudden predicament and looking for a way forward.

I've helped many clients who were once in your shoes, and found that analogies can help make sense of things. As the NHL's newly-established Seattle Kraken prepares for its debut season, it recently struck me how starting a brand-new hockey franchise is not all that different from building up a case for a client who's been in a car accident.

Here's what I mean.

Franchise-Building Is About Building Forward Momentum

As an avid Seattle sports fan, I've eagerly followed the Kraken's progress. Fans like myself developed an emotional investment from the moment I discovered the team’s name in July 2020. I've devoured the details of the Kraken's steady development, from the assembly of a roster to exhibition games and the Kraken's NHL regular-season debut.

The Kraken's road to participating in meaningful hockey has been a slow roll, and the payoff is soon to come. Perhaps it's natural that I've been attuned to the Kraken's steady progress—I invest great time and attention in my clients' cases every day, working diligently towards a goal that may lie weeks, months, or even years in the future.

My clients' cases start with an accident or personal injury incident. With steady forward momentum, the nature of each case becomes clearer, as do my goals for the client's financial recovery. This steady forward momentum is the same sort that the Seattle Kraken franchise has developed since its earliest days when the “franchise” was little more than an idea.

When building a car accident case for a client, I start from the foundation and work upward. Just as Kraken's leadership had to hire a staff and build a roster from scratch, my firm starts its clients' cases with a blank slate.

As I help my clients find medical care, obtain witness accounts, sort out insurance coverages, hire experts, and develop case strategies, I make progress towards the goals that I share with the client. My firm takes each step in a car accident case with measured intent.

Drafting the right player in the NHL expansion draft can cement a positive course for an NHL franchise for years to come. Hiring the right expert or uncovering valuable evidence can have a similarly long-ranging, positive effect on a client's case outcome and quality of life.

Like the Kraken's front office evaluating prospects or a coach allotting playing time, my firm considers a data-driven approach to its clients' cases. I often consider hard numbers—analytics, as hockey fans might call them—to evaluate the best options for my clients. From choosing which experts to hire to assessing the fairness of an insurance settlement, my firm often evaluates reliable data rather than relying solely on intuition or gut feeling.

Bear with me, because the comparisons between the Kraken's rise to fruition and the evolution of a car accident case don't stop at the top. Clients have an investment in their case just as a fan, player, or team employee has a stake in the Kraken.

When any franchise first comes together, I can imagine it's like the first meeting between attorney and client. Players and coaches meet for the first time, just as lawyers must introduce themselves to their clients. Those early meetings can be defined by unfamiliarity and uncertainty.

With each passing day, trust builds. A client develops faith in their lawyer, monitoring the progress of their case as they regularly interact with their law firm of choice. Coaches, players, and others in the Kraken franchise have likely built similar trust in the months since they first came together.

Eventually, with mutual trust and hard work, the prospect of actually winning (a settlement or Stanley Cup) becomes a reality.

In every case I've handled, there are challenges. Just as the Kraken will rebound from a recent 6-0 loss to the Edmonton Oilers, my clients and I find solutions for every unexpected hurdle that arises during their case. Players can't be expected to make the necessary adjustments without great coaching, just as car accident victims may benefit immensely from a lawyer's experience and guidance.

The Seattle Kraken has an ostensibly different goal than my firm and my clients do. The Kraken is seeking a Stanley Cup, or at least to put on a valiant showing in their debut season in Seattle. My firm and its clients, on the other hand, seek fair compensation for their losses.

When viewed analogously, though, the Seattle Kraken's road to the regular season can be similar to the road that me and my clients follow. A personal injury case and a brand-new NHL franchise start as an idea, with potential growing steadily into something tangible.

The ultimate goal for both the Kraken and my firm is victory, a just outcome that reflects the time and effort invested in a season or case. With patience, mutual trust, and positive momentum, I aim to make every client's case into a quest for the Stanley Cup.